Remember when I wrote about being Unfriended a little over a year ago? Well, as of last night I was re-friended. The more I think about it, it was actually worse this way. We should have stayed unfriended. Because ignorance is bliss. Naturally I had to go through all the pictures and posts and things he had been tagged in over the last year. (Clearly he had broken up with the girl he unfriended me for – I already knew that – I had gotten a text from him about it a few months ago.) But the other things I found were a little more interesting…like the fact that they were ENGAGED. That is way more than some casual relationship. So then I got really upset again. Drove myself absolutely crazy. And then I started praying. I prayed like crazy to seek first the Kingdom as well as to remember that we are not the same religion and that he treated me like crap when we were a fling but mainly to seek first the Kingdom and all other things will be added to you [Matt. 6:33]. 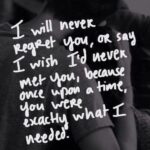 Once I felt I had calmed down I started to compile a list of all the things I didn’t like about my ex-boyfriends/flings that will save me time and heartache down the road as well as caused me to grow and hopefully become a better person. As I kept writing I realized I learned a lot of great things in the relationships as well. Habits and actions that will lead to a better relationship down the road. I’m not saying that any of these guys were bad guys, in fact, I still care very deeply for a few of them. However, there were parts of them that now I won’t have to live with for the rest of my life.

2. Never underestimate the power of hearing someone’s voice. When B and I dated unlimited texting was not a thing – I didn’t even have texting. So we had to talk on the phone, sometimes we talked for hours and it really did help being able to hear the the other person’s voice and not just have to read it and assume how they said it.

3. Distance can kill a relationship. I wouldn’t say this is what did us in but I think when it came down to the end, the distance wasn’t working in our favor – especially in high school. High school is all about the experience and if you can’t experience it with them, then it strains everything.

4. Differences will make you grow. There’s nothing in the world like someone opening your eyes to knew ideas and ways to approach things. I think some of the most growing in my entire life has been in the period of time AGB and I were dating.

6. Little notes can mean a lot. AGB and I were in high school together but different grades with no overlapping classes so we passed notes in the hallway. It’s a great feeling to open that note and know that someone is thinking about you.

8. When you love someone, you’re willing to do anything to make them happy. A week before Prom, AGB totaled his mom’s car and as a result, lost his license. Right before the license losing but after the accident, he really wanted to drive and kinda-sorta begged to drive my car. It was a short distance (because I was paranoid about getting in trouble at the time) but I let him.

9. When someone wants to see you all the time and as a result you never see your friends or family – it’s time to get some distance. Towards the end of my senior year (around Prom), AGB and I were hanging out constantly and I never had time to have my Prom dress fitted. As a result, I ended up with a dress not as flattering as it should have been because I couldn’t give my mother 10 minutes of my time. Throughout the summer I rarely saw my friends. It wasn’t until the end of the relationship that I realized what I had been giving up.

10. When someone says they want what’s best for you – they really just want what’s best for them. Right before I left for college, AGB and I broke up because- in addition to a LOT of other things, he “wanted me to have a great freshman year of college.” That’s great, me too, but that doesn’t mean it would have been any less great with him. Especially since we ended up getting back together. I digress.

11. If you don’t think someone deserves you it’s because they don’t. Multiple times in college my friends told me how much better off I would be without him. He misplaced his phone and never thought to email me until the next morning after I had sent multiple texts and a voicemail. If you have plans to talk and that person bails to hang out with friends they can see all the time then you know where you rank on the priority list. And if you aren’t one of the top options then you really aren’t an option at all.

12. Sometimes no distance is a bad thing, too. After my freshman year there was a huge adjustment for me to make. I went from having all the freedom to having to live under my father’s roof and follow his rules. It was stressful and I started having what would later be diagnosed as panic attacks and anxiety. AGB and I had a hard time adjusting to being able to see each other every day again and with my panic attacks caused tension between us.

13. If someone no longer wants to be with you, let them go. I tried to fight way too hard to hold on to this relationship and I became depressed and ended up in therapy. There is no point in holding on to something that is already gone. It caused hurt that lasted for years. Sometimes the pieces are better left shattered on the ground.

14. If you have to keep stressing that eventually it’ll work out – it won’t. AGB kept telling me when we had fights or when we broke up or when we hung out after we broke up that we were meant to be together and that eventually it would work out. It gave me a false sense of hope. After all, if something isn’t working now and you take no actions to fix it what makes you think that it’ll eventually work?

15. Everyone has a type. It can be a broader type but one still exists. Dating someone completely out of your type range may appeal at first but it’s likely to cause many issues down the road. I came off a summer of heavy drinking when I started dating R, who was not a drinker and actually didn’t even approve of it. As Gossip Girl said: “No matter how hard you try to be good, you just can’t keep a bad girl down.” Not that I was a bad girl, but I still wanted to party on the weekends. Cue relationship stress.

16. Friends are not a good enough reason not to break up with someone. I wanted out of my relationship with R a few months in to it based on the fact that we really weren’t compatible but decided to stay in it because I befriended a lot of his friends. After we broke up I still was friends with his friends, so staying in the relationship just for that was dumb.

17. Staying in a relationship will lead to dumb choices – like cheating. I’m not saying I made good decisions at all. I was a coward and didn’t have the guts to break up with R so instead I started spending time with other guys to fill the void in the relationship. This led to more secrets and a further divide.

18. Timing is everything. Starting my freshman year in college I had an on and off fling with Skywalker. He was seeing someone and then when he was interested I was in a relationship. I think the few times we both were single at the same time we didn’t know how to handle the situation.

19. If you think your partner is cheating, they are. Do not doubt your feelings on the matter. If he (or she) calls you crazy when you raise your suspicions, then they are definitely cheating.

20. You need to have a healthy balance of your time. At the beginning of the relationship, people tend to always want to spend time with their significant other and at the end of the relationship their friends. If you want it to work it has to be consistent across the board always. You nor your partner should feel like you are missing out on time with friends and each other. Even time alone can be super important.

21. Money matters. Not everyone is going to save every single penny they earn, but it’s not an unreasonable request to ask your partner not to spend hundreds at the bar every weekend. If you can’t agree on spending habits then you’re in for a struggle. I know because that seemed to be the root of the disagreements KJB and I got in to.

22. If he can only talk to you about work or the negatives in life, drop him and run. Crappy things happen in life. But I’ve learned that they only get crappier if you dwell on them. There are a lot of great things in life to focus on instead of the few bad things.

23. Don’t ignore your family’s opinion. My sister disliked S a lot. She brought up things that once said, I completely agreed with. Once my eyes were opened, I myself didn’t know what I saw in him.

25. People don’t change, they just become more of who they are.

Here’s to finding the right guy on new terms. I’m seeking the Kingdom first and he’ll be added to my life – just like it should be.

*Names have been abbreviated or changed.