Social Media Rant and why Timehop is the best social media app created.

I absolutely believe that social media is ruining our lives. Over time (and social media – oh the irony) I’ve realized other people have the same conclusion. In a world where we feel more connected with 1000 of our “friends”- we actually become less connected with the 20 friends that actually matter to us. We care more about looking at a girl from high school (that we didn’t like…)’s puppy then  we do about having a conversation with our friend who is sitting in front of us at dinner. What happened to the days of quality over quantity? Why are we competing for likes when we could be out doing something that is actually worthwhile? Why aren’t we at the gym to make ourselves healthier instead of at the gym to show off how cute our “workout” clothes are? And don’t even get me started on how easy social media makes it to cheat on your significant other.

I don’t think technology as a whole is bad. I think technology is great. The tech industry pays my bills and it allows me to effortlessly talk to my friends and family in other states. Everything in moderation. I’ve probably wasted at LEAST a year of my life on social media of some sort – dating all the way back to MySpace to the present forms of Twitter, Instagram, Pinterest, Facebook and Snapchat. That’s a year of my life that I will never get back – a year that I can’t spend with the people that are most important to me. And I have no one to blame but myself.

Going abroad and not having a cell phone or constant internet access was probably one of the best things I’ve gotten to experience. The fact that you had to make plans with people and they had to follow through because there was no way to reach you and cancel. Not just that- I didn’t have to deal with the pointless drama that surrounds Facebook hourly. Or, maybe I’m just “friends” with too many people on Facebook. Anyway, I digress. I have had some amazing and very memorable posts/ memories on Facebook. In a way, Facebook is just a big scrapbook that people put way too much crap in. But it’s a scrapbook of great memories none-the-less. Speaking of memories, lately I have been obsessed with the time hop app. In case you’re not familiar- you hook it up to all your social media sites and it tells you what you posted on that day so many years ago. I think this is brilliant.

When I was in college I was obsessed with posting song lyrics as my Facebook statuses. Some of the songs were mainstream but most weren’t and all of them were a reflection of how I felt that day. For most of the status, I can tell you exactly where I was sitting and how I was feeling. For example, this weekend five years ago was Homecoming my sophomore year of college- when one of my favorite photos of my bestie and I was taken. Maybe that’s important to me, maybe that isn’t. Last week, five years ago, I posted a song by a band I’ve never heard of since – and as a matter of fact I even had to Google the lyrics to find the name of the song and band – but it was a good song and I can remember exactly where I was sitting and which guy I was “in love” with at the time. Really, timehop let’s me remember amazing songs which triggers the memory and emotion I was feeling at the time. This totally relates to one of my favorite Gossip Girl quotes from Season 3:

I’ll admit, I likely won’t quit using social media anytime soon. It is a good way to see what people are up to and to somewhat stay in touch with classmates. It’s also a great way to spread awareness of issues that are important to us. However, we can’t just post – if something matters to you then you need to go out and actually take action and participate in the cause. With that being said, going forward, if you notice my presence less on social media, realize that I’m choosing to spend quality time with friends in my physical life- and work towards a greater goal- and spend less time in the virtual world.

Oh- and in case you were curious the lyrics I posted on Facebook and remembered because of Timehop that prompted this post, here they are: 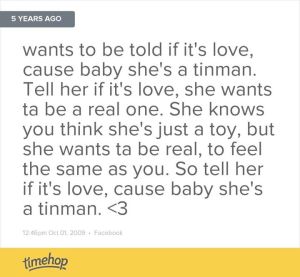