Monday. I’m not sure how I feel about Monday’s anymore. Monday’s mean the weekend is over and I have another 5 days until the weekend. Which isn’t the worst thing- but the weekend provides more relaxation than the week does. This past weekend I was in Chicago to spend the weekend with my bestie and shop for bridesmaids dresses. It was actually a lot of fun and we agreed (at least I’m pretty sure) on the bridesmaids dresses for the wedding. Especially since both she and I have lost a bit of weight so it was more fun to try on dresses.

Anyway, let’s talk about this song and how much I love it. I heard it on the radio a few weeks ago and Saturday night in Chicago, Katie and I played this on repeat over and over again as we were driving. I mean, the lyrics are just so amazing. If you haven’t heard the song, go listen to it now – but pick the video that just has a green X- because the official video is weird. Anyway, I digress, Katie and I played this on repeat and we were both singing it the entire time.

Getting cheated on sucks. In case you hadn’t noticed, that’s what this song is about. Basically dude doesn’t want to date this girl, decides to date her, falls for her and then she breaks his heart. Ah, love. Also, story of my life. Especially the third verse. That’s my favorite and the one that hits home the most.  I mean, after three years I was looking for both a promise and commitment but he wasn’t. However, with my life being the movie that it is, he has now realized what he lost and it seems that he wants me back. Yep, he’s asked me on two dates in the last week. I told him that he was confusing me and asked what it was he was doing or wanted. To which he said he realized what he lost and other things about our relationship like the fact that he wishes we hadn’t moved in together so soon in to our relationship.

And the truth is, I think he makes a really great point. I moved in with him six months in to our relationship since I graduated college and needed a place to live and he was cool with me helping him pay the bills. It seemed like a win-win situation at the time. Which it was because we got to spend time together all the time and he was getting help with the bills and it was cheaper than anyplace else I was going to live but what ended up happening was that we didnt appreciate each other. By the end he didn’t appreciate that I did the dishes and cleaned and I didn’t appreciate the work he did around the house. Neither one of us apprecaited when the other one cooked for us and it just became a really vicious cycle.

Hindsight is 20/20 and we can only improve our future relationships by knowing that. Out of all of my relationships this one taught me the most about living with and loving someone. Long story short: relationships are hard work and don’t take anyone or anything for granted. They can disappear just as soon as they appeared. 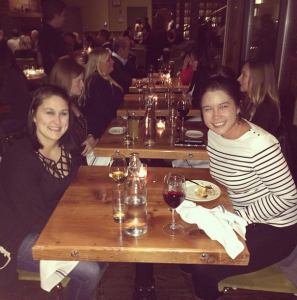 With Katie in Chicago. We went to the City Winery in the West Loop. It was amazing (and pricey) but definitely worth the trip. I have no idea what I would do without this woman in my life.

I’ve learned that relationships with men will come and go but your best friends will always be there for you.