Well, thank gosh Monday is over. Monday takes the brunt of the rest of the week because no one wants the weekend to end. I really don’t hate Monday- I just really don’t like what Monday means.

The good news is that the messages have slowly started to die down. Let me explain. I joined Tinder last Sunday. If you’re not familiar with Tinder- that’s probably for the best. In short, it’s an app that lets you add a few photos and in my case, local men decide whether they would like to get to know me better. aka. they decide if I’m hot enough to hook up with. I was aware that Tinder was a hookup app going in to it. I was also aware that one of my best friends met her boyfriend on Tinder and it’s going great. This dulled my beliefs in to thinking that some gentlemen on Tinder actually wanted something more than just a hot girl to fool around with. I’m telling you now that this is not the case. Men on Tinder only want to hook up- don’t let anyone fool you.

Now, if you’re ok with just casually hooking up- then download this app- you will love it! There is no better feeling than getting a match and a hot guy messaging you. Until you start to get messages like this: 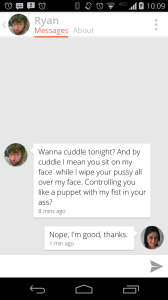 Like, what is this? Who sends a message like this to someone that they don’t know? On the other hand, I have to give him props for being so ballsy. Obviously it must work on some women, otherwise he wouldn’t keep starting conversations like this. Ryan and I have not talked since then. He hasn’t been the only one though- multiple of my “matches” and I have had conversations like this.

At first, the conversations about how beautiful I am was very flattering. Especially since I was out of a long relationship and needed an ego boost. Now, I’ve changed my settings so I can’t even be found and I can only talk to the guys that I’m already matched with.

I’m not saying that Tinder is a bad app. If you just want to get some, then this app is great because it will show you locals and if you both are physically attracted to each other then you can meet up. Let me warn you though: the guys do not actually look like their pictures. I would have to say this is the biggest issue that I’ve had. I’m not on dating sites so I’ve never experienced this before. I, too, put up my best photos, but they were recent photos that I looked good in- not photos from 5 years ago when I was 30 pounds skinnier.

Don’t worry, I’ve learned now. I’m asking for face photos before I decide to hang out with them. And let me tell you- catfish. Not all of them. But most. I’m honest on my profile and I don’t need to show up because I decide to hook up with you and then you’re 25 pounds heavier and 5 years older than you are. If you’re going to be on a hookup app you need to at least make sure your profile is up to date.

That’s my rant. Otherwise, there do seem to be some cool dudes on Tinder that I would let take me out to dinner. As for guys like Ryan, as my father would say, NEXT!