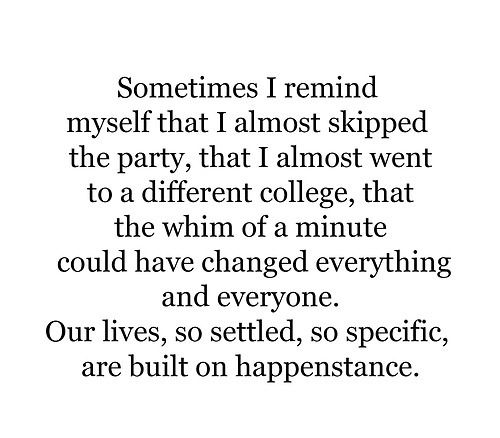 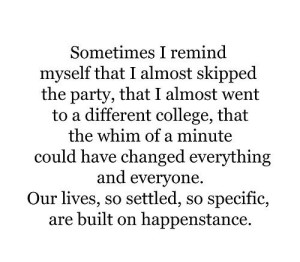 Ok, ok, don’t judge me. I started taking the quotes that I pin on Pinterest and turning them in to my blogs. You can only say so much on Pinterest that people will read. They mainly just look at the images. So, with the quotes that I really like I’m going to write a post. I was in need of some quotes anyway. It’s not like quotes are my favorite things ever and I have pages and pages of them (ok, you caught me, I do.)

Anyway, happy words of wisdom Wednesday. I found this quote on Pinterest a few weeks ago and it just hit me how true it is. I’ll let you re-read it for just a minute to let it sink in.

I used to think that my parents’ divorce was the worst thing ever. At the time it was. That event changed everything. A drop in the river ripples everywhere; because of that nothing will ever be the same. Really, what I want you to take out of this is the realization that one second can change your life. There have been a few days that I’ve gotten really upset that I forgot something for work at home and I had to go back and get it. Maybe those extra two minutes where I had to turn around and go back prevented an accident or caused me to get a better parking spot- thus putting me in a better mood at work. Ultimately, just because something crummy happened to you doesn’t mean it’s going to be a crummy rest of the day or year or life. Just let go and let it happen.