Happy Friday, loves! I can’t believe it’s the weekend already. Seems like just yesterday it was Monday. I’m not sure exactly what my weekend has in store yet. Maybe I’ll meet Katie somewhere and we can do some wedding planning. Perhaps I’ll see Calla and meet her new beau. Or maybe I’ll stay home and get housework done. 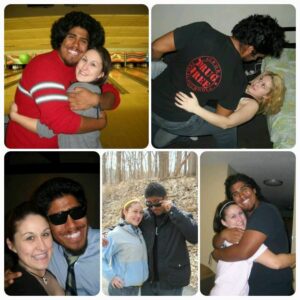 Anyway, this week I have to honor one of my best guy friends of all time. Some of my best (and more recent) memories involve Enoc. So what I’m going to do here is count down my top five favorite memories with Enoc.

5. St. Patrick’s Day 2011. I was out celebrating for one of my girlfriend’s 21st birthday plus St. Patty’s is my favorite holiday ever (I love the leprechauns) and it’s a big drinking holiday and we were in college. Anyway, after partying with the birthday girl I went back to hanging out with Calla and letting guys hit on us. Long story short, Calla did not want to come back to my room for after hours and I ended up there with three guys- one of whom I was friends with and two that I didn’t like. Naturally, things got awkward so I texted Enoc telling him that there were creepy dudes in my room that weren’t leaving. Enoc was still at the bar playing pool but booked it out of there and ran all the way back to my room. He told the guys that he broke a pool queue and that the cops were called and he ran back to my room because it was closer than his room and ultimately told the guys that they needed to leave so he could go to sleep. Enoc= lifesaver.

4. 8th Block Break, April 2011. A group of friends and I went back to my family farm for block break. Because there were six of us we split in to two cars. In my car were Calla and Enoc (we were a trio) and in the other car was Katelyn, Richard and Earl. The whole drive up we kept passing each other and Calla, Enoc and I kept goofing off and having a good time. We even got to Wisconsin about 15 minutes faster and went to the library to hide from the guys and Katelyn. They didn’t think it was funny. Then on Friday we all went to a fish fry- Enoc’s first- he hated fish. Needless to say, he now loves Wisconsin fish fry. Calla, Earl and Katelyn decided not to stay through Saturday so Saturday night it was just me, Richard and Enoc who went to have dinner with my mom and stepdad. Overall, it was a great trip and my family loves him.

a. Being in college, there were lots of places we were’t allowed- like on roofs. And things we weren’t allowed to do- like smoke. Well in my film and under my direction, Enoc and Julian broke both of these rules. The day we needed to film the roof scene was especially funny because I was the one that was reluctant to get up on the roof to do the filming. And then after playing back the footage it was too noisy so we had to get off that roof and find another one. Neither Julian or Enoc smoke and I kept making them smoke in the scene. I felt so bad.

b. There was one Saturday morning that we needed to film. Julian and I were ready but Enoc was no where to be found and not answering his phone. After repeated calls Enoc finally showed up riding a bike and hungover. Needless to say it was a funny day of shooting and I punished him with lots of smoking. He took it like a trooper.

2. Pre-Season. August 2011. Enoc and I were both food service managers so we were expected to come back early to serve food to the football and other sports players. When we weren’t working, Enoc and I hung out the whole time. One day, another friend gave Enoc a bunch of bottle rockets (or some sort of small firecrackers). That night after work, Enoc and I went on a walk through a farmers field and lit off the firecrackers. Afterwards, we sat in the theatre and talked about all sorts of stuff. It was great. A few weeks later we went out to dinner and took gravel roads and lit the rest of them off. It was hilarious. I hope we didn’t scare any cows.

1. Milt Formal May 2011 and April 2014. Yes, I was lucky enough to go to Enoc’s fraternity’s formal two years; once when I was in college and then this past month. Both were a blast. Neither need more elaborating because he already knows all the inside jokes we have about those events.