Happy Friday everyone! I’m so glad that it’s Friday. Especially because it’s so nice out. I wish that I were sitting outside right now with my puppy and some Starbucks reading F. Scott Fitzgerald. Alas, I am indoors looking at a computer screen and talking to a gentleman in Europe who is eating dinner.

However, it’s Friday so I need to list my Friday Friend of the Week. The winners of this, without a doubt, are Calla, Katie and Spencer. They kept me from having even more of a breakdown then I’m sure I could have had earlier this week. They are they best! This week however, since they have been written about numerous times, I need to write about my daddy. 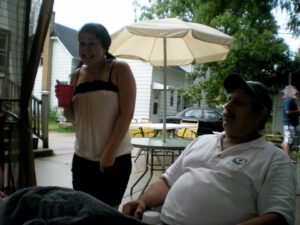 This week’s writing is two fold. One- I love my daddy; he’s the best- so I need to give him a little honor and love. Two- I need to call some other dudes out on some major B.S. and this was the best platform I could think of. So…with no further adieu…

Part One: Why My Daddy is the Best Daddy in the Entire World.

1. My dad gives the best advice and has the best stories. When I was going through my first real break up my dad came in to my room and told me that the only reason I was upset was because he broke up with me before I could break up with him. There was a little more to it than that, but for the most part he was right. I was hanging out with other people and we were starting to drift apart. It wasn’t smooth sailing after that in terms of getting over him- but it definitely allowed me to realize why I was crying. And it wasn’t really because the relationship was over.

2. My dad has my best interests at heart and is hilarious. Case in point: I was getting ready to break up with a guy in college but hadn’t had the nerve to do it yet. Anyway, said guy was still in love with me and sent me flowers for our nine month anniversary. The night before I was quoted saying, “I hope he doesn’t get me flowers, because they’re going to die just like our relationship.” So when the delivery guy showed up with the flowers, my dad walked outside and politely told the driver that I didn’t want the flowers. The guy was appalled and asked if he was at the right house. My father said, “Yes, but she doesn’t want those.” Somehow the flowers ended up in my house. But it makes for a good story.

3. My daddy is honest and down to Earth. I remember when my sister and I were really little, shortly after my parents divorce, we were both in bed with my dad for story time. I’m not sure if story time was over or if we got distracted but we ended up asking my dad which one of us he loved more. He said he couldn’t answer that so we would have to ask him more specific questions. So we did. Like which one of us was prettier, which one of us worked harder and so on. I don’t remember all the questions we asked- but I do remember that he answered them all.

Part Two: A Bone to Pick

Ok dudes, listen up. Maybe this is just me- but I don’t think so. I’ve already said that my dad was a pretty cool dude. The examples above- those are just three examples. I have 24 years worth of stories. I’m sure everyone thinks that their dad is the best in the world- the difference is that mine actually is. Sure, he has his short comings. He has a LOT of them. But at the end of the day, you can’t tell me that my dad isn’t a real man- he played football, baseball and soccer. He drinks beer and tequila [read: Mescal] as well as drives a truck, a motorcycle and his collection of vintage cars. He’s crashed his motorcycle and a plane and has driven across the country multiple times. Oh, and I’ve only ever see him cry two times. One was when my mom left him, the other was when he dropped me off for college my freshman year.

And this is where the bone picking starts. There are very few reasons in life where grown ass men should cry. The only acceptable reasons are:
1. Parent/Sibling/Pet/Close friend’s death. Along the death lines.
2. Divorce.
3. Dropping kid off for college.
4. Child being born.

That’s it. If you get kicked in the balls I’ll give you a free pass- as long as it doesn’t happen every time you get kicked in the balls. Toughen up. There’s a reason why they call it man up. Is this sexist? Oh, probably, but there’s no way I’m the only one thinking it. I do not want a dude that is more emotional than I am. I am plenty emotional for the two of us. I do want a guy that will share his feelings with me and is open and honest; I don’t want someone that is overly emotional.

Crying is awkward. It’s awkward when a girl’s makeup runs down her face and everything is all smudged. It’s even more awkward seeing a guy cry. Let me elaborate. I want you to be my rock. I don’t want someone who is going to get upset and just start crying because there is no other way to express yourself. When the going gets tough for you- I will absolutely be your rock. But if you are crying as a way to guilt me in to doing something, no way, Jose. See ya around.

While writing this article I polled a handful of people from different walks of life regarding acceptable reasons a guy could get away with crying. The results were actually really interesting. The guys polled said that the only acceptable reason was death. The women said a wedding or a death. However, one woman went so far as to say getting kicked in the balls or a woman being spiteful. Ultimately, everyone is different, so maybe you’ll find a rare gem that’s enlightened and doesn’t care when you cry. Maybe you won’t.