Reasons Why Chuck Bass is my ideal spouse 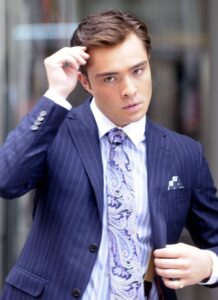 Last night before I was able to fall asleep I thought about a bunch of things. One in particular was my future spouse. At the same time I was also thinking about Gossip Girl- namely, Chuck Bass. That’s when I realized Chuck Bass is my ideal spouse. I even compiled a list of reasons why.

1. His sense of style. Chuck Bass dresses very nicely. Even in the early episodes when some of his outfits were questionable, Chuck Bass still looked good. There is not a single episode that he wears jeans. I bet you can’t find one.

2. He’s a hardworker. Ok, maybe not in the first season or so because his dad pretty much handed everything to him. But in the later seasons he really worked to improve the company and make a name for himself.

3. He’s incredibly loyal. Remember that episode where he warns Nate about Carter and the poker game but Nate goes anyway. And then Nate gets in trouble and Chuck shows up and completely comes to Nate’s defense even though Nate took his autographed baseball.

6. He’s a family guy. I mean, yeah, he hates his father. But he totally loved Lily. And even Serena when they were step-siblings. Plus, he settled down at like what, 22? And had a kid afterwards.

And one reason that maybe he isn’t so great:

But I have a feeling I’ll get past that! Because he’e Chuck Bass.