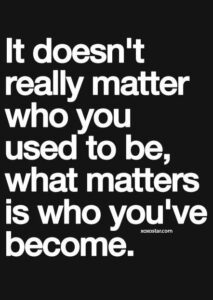 This is one of my favorite quotes recently because it has a real, personal meaning. For anyone who has been reading my writing since I started this blog in 2013, you can probably tell the difference in my attitude based on my writing alone. While I was a generally happy person, as I try to be, I had a lot of angst and I did a bunch of pretty stupid stuff. Stuff that would probably make my dad embarrassed and my mother scold me. I was raised pretty well, I’m not gonna lie, but I hit college and bam did I want to rebel. I didn’t go totally off the deep end but I went far enough. Reflecting on where I am now, yeah, I would definitely have made some different choices, probably a lot of them, I hurt some people I cared about pretty badly. I only really regret a thing or two though. Because those experiences made me exactly who I am today. And I like this young woman I’ve become.

I’m relatable. I’ve been broken and I have broken others. I’ve given in to peer pressure and I have stood up for what was right. I have been let down and I have let others down as well. I am a human. And like my first post on this 31 days of Inspiration Challenge, I am determined to use those experiences to help and strengthen others.

There are some days though that I am still almost brought to my knees or I choke up because of the memories. When I get really sad, I can’t help but think that if I stuck to God’s path and really embraced it, that I would be where I always wanted to be right now. Instead, I’m where I am, waiting on time.

I think what hurt the most was when my father said that he hadn’t come to Iowa in 4 years because he was disappointed in me. Julie and Chelsea reminded me of all the progress I had made and noted how far I have come. And I have. And in Jehovah’s eyes, it doesn’t really matter where I was because I’m on the correct path now. And as long as I’m happy with who I’ve become (which I am) that’s really all that matters, because the only person who has to live my life and with everything I’ve done is me.

The Next Chapter, Words of Wisdom31 Days of Inspiration, change, God, quote, relatable, words of wisdom