This quote is very similar to my ‘and then‘ post a few “days” ago. I say that because it should have been a few days ago but here we are at the end of the month and I’m trying to get the rest of my blog articles in. This quote serves as a reminder that even though there may be some less-than-desirable things going on in my life, that they are shaping my life and (hopefully) helping me to become the person that I want to become. 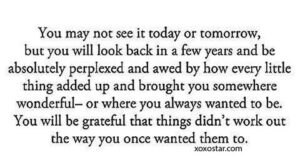 In college I ultimately driffed away for a period of time. After I graduated I lived with my boyfriend and my sister was dating a guy from Iowa and everything was great and she was going to move to Iowa after she graduated and we were all going to live happily ever after! Yeah, maybe not so much. Sarah’s boyfriend was less than desirable and long story short, they broke up and she moved to Wisconsin. She started going to meetings with my dad and eventually progressed to the point of baptism. By this time my boyfriend and I had also broken up and it was pretty heartbreaking; I thought I was going to marry that guy. Our breakup was a blessing in disguise though. I moved out and in to my own place and on one of Sarah’s visits exactly a year ago, she really upset me.

She told me all about how I was not living in harmony with God’s principles. When you think you’re making the right decisions in your life, this can be really upsetting and believe me, I was upset with her. But more than anything this was a wakeup call that I really wasn’t working in harmony with even my goals that I set when I was younger. So I made a bunch of changes and here I am, a year later and that goal checked off my list of things to do before I die.

All these little things adding up to something wonderful. It’s crazy how it all works out in the end. So if you’re struggling with something just keep pushing through, after all, it may help you meet your end goal in ways you never imagined.