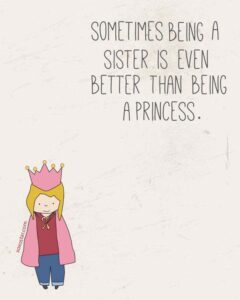 Aaaand another quote chosen for a specific day. I love my sissy booboo. And yes, that is what I call her. When we were little, Sarah and I didn’t really get along. We didn’t get along until our babysitter probably thought we were going to kill each other and decided to reward us with prizes if we behaved and treated each other like decent human beings. To her credit it worked and for the last handful of years, my sister has been one of my best friends. We went through a lot when our parents got divorced that allowed us to bond and brought us closer together and then even throughout high school there were a lot of days when I wanted to strangle her – but I didn’t because that isn’t how a decent human being acts. Oh, and I loved her- some days I had to dig a lot deeper to find that love though.

Sarah occasionally still does things that really annoy me but it’s hard to stay mad at her when I see her maybe 6 or 7 times a year. That’s the thing about sisters: they know how to push ALL your buttons and sometimes push them in just the order that, if they were not your sister, you would have legitimate reason to never speak to them again. But, sisters, so that’s out the window.

Growing up I was an absolute Princess. With a capital P. I can’t even begin to deny it, nor do I really want to. Sarah knew that and even used the word as an insult.  Being the younger sister, Sarah was a total brat. But at the end of the day, having Sarah as a sister has been one of the greatest gifts I never knew I wanted. I had a built in best friend from childhood – someone that I could force to play Barbies or wash my feet (long story). I had a built in shopping buddy, party buddy and shoulder to cry on. Some of the best memories I have involve Sarah. At the end of the day, having a little sister is definitely better than being a Princess.