When deciding to do this 31 days of inspirational quotes journey, I knew that I was going to assign some of the quotes that I picked out to certain days. Once those were filled in, the others were just randomly assigned. This is a quote that was specifically assigned to a number. So why the 10th?

The 10th is the day of the month that my high school boyfriend and I broke up for the second time. This was so long ago that I’ve moved on but I think that there is something so sweet about your first love and no matter how much my mother hates him, he will always have a special place in my heart. 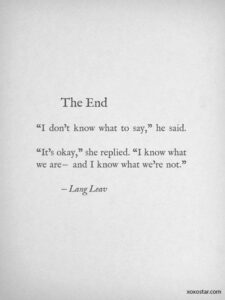 Our breakups both took an enormous toll on me. You see, we were completely different people. I was very academic and involved with my school. I was in as many AP classes as I could take in high school and head of the prom committee and in school plays and volleyball and didn’t really get in trouble. Andy was the opposite. He had drive and specific goals but he was so focused on that one goal that nothing else mattered- even if it would have helped him reach his goal sooner. Andy is a really smart guy – he knows finance and stocks and stuff so well it’s unbelievable, but he didn’t care about school or his homework.

8 years later Andy is on the correct track to achieve his end goals but it took him a lot of detours. He was a bit of a troublemaker and I tried so hard to become his perfect girl. I was against underage drinking but when I went to college (a week after we broke up the first time) I started drinking and partying. I posted everything on social media. I was so not even a little bit over him that it was pathetic. I pierced my nose and “accidentally” texted him.

We got back together February of my freshman year of college and broke up June 10th after a week long break. During those four months there were a lot of firsts and a lot of firsts followed after our breakup. Our end was no where as sweet as the ending in this quote, but I think it is overall true. I knew what we were and I knew what we weren’t. It took seven years of up and downs and a lot of really nasty messages but I’m happy where we are today. I’m happy he’s accomplished what he has and that we are able to actually hold a conversation now regarding both of our futures instead of the tangled mess of the past.

I guess time really does heal everything.