Ok, now that I’ve been back home for two weeks now it’s time I sit down and review my trip to Europe. I wanted to get this done sooner but it’s funny how much you have to get caught up on when you’re gone for three weeks. So let me fill you in, from the beginning, because that’s only proper.

I’ve wanted to go to Europe forever. Like the, backpack across Europe for 6 months after college forever. So two years ago my sister and I decided it was time. I created a new bank account with a great interest rate and automatically deposited 5% of each paycheck in to that account. After two years, that really adds up! In October of 2017 we booked our tickets and decided it was time to start planning. With easy access to the internet we decided we might as well do it ourselves. 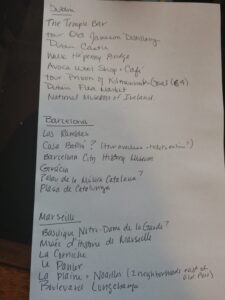 We made lists of all the places we wanted to go and determined we could really only be gone for three weeks. Then we determined what places we had in common on our lists and what route we would take. Then places started to get the ax – like Scotland, Greece, and Germany. We narrowed our trip down to Dublin, Barcelona, Marseilles, Genoa, Rome, Split, Brussels and London. In three weeks!

The great news is, travel between countries is pretty cheap when you’re already in Europe. We also decided to get a Eurail pass and see Europe by train. We bought one 15 day continuous pass. Since we were traveling together the whole time we got a discount. We also bought it in the off season (December) and that saved us an extra 10%. Score! (Pro tip – I also use Ebates and Eurail is on there and that got me extra cashback). Nothing like saving some money! We booked our flights between the countries we couldn’t get to by train and then we booked our Airbnbs.

About three months before our trains departed we could officially book them on the Eurail website and reserve our seats. They also have an app which came in handy when we were in Europe so we could see all the train information and when we needed to get off or switch. 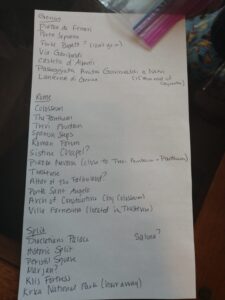 Then came the fun part – figuring out what the heck we wanted to do in each location given we only had 2-4 days in each place. We went through oodles of websites and created a board on Pinterest to try to narrow it down. When I say oodles, I really do mean that. Then we cross checked against what was relatively close to where we were staying and what we both had an interest in.

Fortunately, I didn’t have to contact my credit card company regarding my international travel. I decided that would be the route to go in hopes of getting the best conversion rate. Plus, I didn’t want to run to the bank to get out any Euros (my sister did).

Then it finally came time to pack. We decided we were going to take one checked bag and we would each have a carry on and our purse. I ordered the Osprey Fairview 70 and used the daypack that zips out as my carry on. My sister ordered the Patagonia Black Hole backpack which served as her carry on. We both ordered Travelon crossbody purses.

Then it came time to figure out what to pack – we knew we needed to get souvenirs in each place and that my bag was going to carry all of those so I had to be choosy when it came to my shoes and clothing. It was also predicted to rain while we were in Dublin so I had to make the call on whether or not I was going to take some sort of water resistant shoe. (spoiler alert: I didn’t.) The good news was that my father always taught us how to pack incredibly light – especially since those bags we bought didn’t have wheels. We would be carrying everything around when we were traveling.

Here’s what I narrowed it down to: 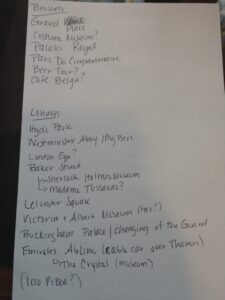 I felt pretty great and accomplished. Everything fit nicely and I still had some room at the top of my bag! And then before I knew it, we were off to Chicago to board our plane! We flew United and left Chicago at about 9pm – which would conveniently land us in Dublin a little after 11am. We would then check in to our Airbnb and be off! Sleep was going to be essential on the plane so we could hit the ground running. We were delayed a little bit for catering but we figured no big deal. At about 1am we were awakened to find out that our airplane didn’t have portable water and that we would need to make an emergency landing in Newark to have it checked out. We then flew around in circles for two hours burning enough jet fuel to safely make this emergency landing. TWO HOURS. It only would have been a few more hours and we could have been in Dublin. Apparently though, they weren’t able to service the water over there – whatever that means.

Finally we land and we sit and wait and then we wait some more because we were all cleared for customs already so they don’t want us getting off the plane. They also think we’ll be back up in the air by 4am. As time ticks away and we lose more and more time in Dublin, we are finally let off the plane and told it’ll take off again at 6am. To appease everyone, we’re handed a $10 food voucher to spend at the airport. Right, like that was going to make up for it. Besides, at 4am none of the restaurants are open at the airport so your only option is the kiosk. Meanwhile, while this whole thing is going on, you better believe I was tweeting at United trying to figure out what the heck was going on. On the bright side, I was one of three people they responded to regarding this issue. As 6am approaches, another $20 food voucher appears along with the news that our flight will now be departing at 8am. Which, with travel time and timezone differences, doesn’t get us to Dublin until 10pm – meaning that we lost any time we were going to spend there. Excited, we all board the plane at 8am just wanting to get there when…more catering issues! Just what we all wanted. Some of the other passengers on the plane are losing it and screaming at the flight attendants because we just want to get to Dublin at this point. Finally, at 9am the flight departs and we eventually land in Ireland at 11pm local time.

Each country was so amazing so I’m going to stop this post here and there will be a separate article for each city in Europe that we visited. I promise that they’re good and that you’ll want to read them all. Plus, they say that things happen in series of three – and we just knocked out one.