Day 29: Satan and his Future

Simply put, Satan is a big jerk. He doesn’t care about anyone and he is trying to bring down as many people as he can. Don’t be fooled by that. I’ll be the first to tell you that I did have a good time in the world but it was filled with heartache and uncertainty and disappointment and that my life is unmeasurably (Spell-check is telling me that is not a word but I don’t really care) better now that I am living by God’s principles instead of Satan’s. 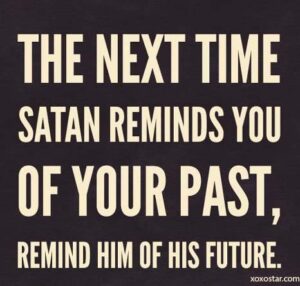 With that being said, Satan is not happy about that and he is fully prepared to make my life significantly more difficult because I told him, in essence, Bye Felicia.  (Link included for reference. I selected the one with no terribly foul language so hopefully that is the one that shows up.) Anyway, I digress, Satan didn’t like being dismissed and I can tell he has thrown some minor challenges my way lately. This is evident in the fact that this post is exactly one month late.

Satan has also really tempted people around me and reminded them of their path as well. I won’t divulge too much because it really isn’t my story to tell. But just know this, God does not let us be tempted beyond what we can bare (1 Cor. 10:13) and he provides a way out. Those two parts of the scripture are key. There is always a way out- if you want it. I’m not sure about you, but someday soon Satan will be sinking like the Titanic (head nod to Leonardo DiCaprio on his Oscar win, finally) and I do not want to be on the sinking ship.

Having been in the world though, I’ve noticed that’s how Satan tries to lure me back. Not anything new. People from the past, random memories, offers to hang out with people I haven’t talked to or seen in ages. I am a pretty social person, especially back in the day, so I feel it important to maintain friendships that were once important to me. That’s the key though, once important. I need to step back and realize that those people are not helping me draw any closer to Jehovah and I no longer have the same goals that they have.

I can’t even tell you how much I have grown up in the last year. February 15th and then March 2nd of last year were big dates for me in terms of turning points. Some days are still a struggle and I’ve found myself being more of a recluse because there are fewer people to associate with and there aren’t always similar interests. Overall though, despite being confined to my house more than I would like, life is going really well. And I’d rather be stuck at my house a little now than go down with Satan’s ship. After all, I may have a past, but he doesn’t have a future.